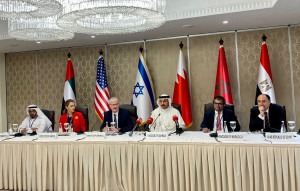 Representatives from the United States, Israel and four Arab countries have meet in Bahrain to discuss ways to deepen cooperation in the Middle East, ahead of President Biden’s visit to the region. These talks come alongside Israel’s President Herzog meeting with Jordon’s King Abdullah, as Israel hopes to restore its ties with the country following the tension caused by clashes on the Temple Mount in April.

Bahrain hosted the talks with Foreign Ministers from the United States, Israel, Egypt, Morocco, and the UAE, this week. The meeting hoped to build off the success of the Negev Summit in March and comes ahead of President Biden’s visit to Israel, the West Bank and Saudi Arabia in July. The Ministers agreed to create working groups to investigate six key areas, such as, security, clean energy, water security and food security. They also issued a joint statement which expressed the groups support for a negotiated settlement between Israel and the Palestinians.

The US’s Principal Deputy Assistant Secretary of State for Near Eastern Affairs, Yael Lempert said: “We’re trying to build a new regional framework… and tangible initiatives that can put flesh on the bones of the Negev forum”. To make sure this success stays consistent, representatives from the six nations have agreed to meet annually, with the next talks taking place this year.

Also, this week, President Herzog met with King Abdullah of Jordon, a meeting which Herzog’s office said took place “in the context of diplomatic developments in the region”. Relations between Israel and Jordon greatly deteriorated during the Temple Mount clashes between April and May, with hopes that these talks can provide a remedy. There have been very few details released of the content of Herzog and King Abdullah’s conversation, but a statement from Herzog’s office said the pair “discussed deep strategic issues, both bilaterally and regionally” and “the protection of stable Israeli-Jordanian relations and the need for dialogue with all actors in the region”.