Minister for the Cabinet Office and Chancellor of the Duchy of Lancaster, Rt. Hon. David Lidington CBE MP, spoke at a concert last night celebrating Israel’s 70th birthday at the Royal Albert Hall, where he underlined that the UK is “proud to stand side by side with Israel”.

The Minister attended the event alongside HRH Prince Charles, Ambassador of Israel, H.E. Mark Regev, the Chief Rabbi Ephraim Mirvis, and 2,500 other concert-goers at the event called Platinum: Celebrating Israel at 70.

Taking the stage, Mr Lidington hailed Israel as a “global leader” in women’s and LGBT rights, a tech superpower, and a key provider of aid to foreign disaster zones.

He said: “At the heart of Israel’s story lies a simple idea, which every person can believe in: the dream of a place to call home, where communities are born, memories are created and dreams can flourish”.

Reaffirming the Government’s commitment to the Jewish state’s “right and obligation” to defend itself, the Minister told the audience that “Israel’s story has the belief in miracles at its heart”, and even added a few words in Hebrew to say that the UK is “proud to stand side by side with Israel”.

Praising Israel’s democracy, Mr Liddington said: “Israel has grown into a thriving democracy and a prosperous economy where the values of freedom, tolerance and the rule of law lie at its heart where sexual, religious and racial equality is enshrined in law and where argument, disagreement and dissent are hard-wired into the Israeli character”.

He also addressed the growing issue of antisemitism in the UK, often masked behind the description of anti-Israel rhetoric: “Antisemitism in whatever form has no place in society and we must never tolerate it… Whatever the political disagreements between Israel and the United Kingdom have, antisemitism must never be allowed to survive by cloaking itself behind criticism of the policy of a particular Israeli government. He added: “It is shaming that our country is having to relearn that lesson today”.

Mr Regev’s speech celebrated the relationship between Britain and Israel, which he described as “strong and growing stronger…creating prosperity and security for citizens in both our countries”’.

Prime Minister Theresa May released a message prior to the event yesterday expressing her delight at the celebrations and stating that “the UK government is proud to stand side by side with Israel as an ally with mutual interests, and as a close friend with shared values”.

Click here or view the image below to read her letter in full. 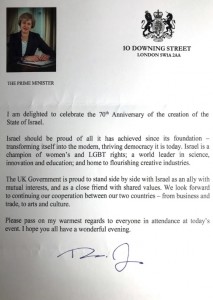