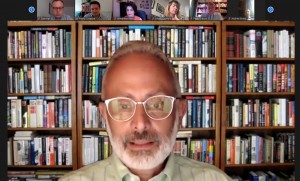 The Hebrew University Professor gave parliamentarians a round up of the unprecedented three elections that took place in the space of a year, and explained Israel’s political system.

Professor Hazan also spoke about Israeli politics within the context of Covid-19, and highlighted what to look out for in the coming months.