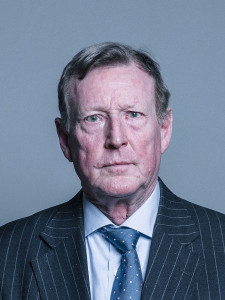 CFl is deeply saddened by the passing of Rt. Hon. Lord Trimble.

Few people have had such a constant support for Israel and CFI has cherished Lord Trimble’s invaluable insights and experience as a long-standing Parliamentary Officer of CFI. His contribution to trying to secure peace at home in the UK and in the wider Middle East speaks for itself and he will be mourned by many.

Prime Minister Boris Johnson said that he was “deeply saddened” by the news, describing Lord Trimble as “a giant of British and international politics and will be long remembered for his intellect, personal bravery and fierce determination to change politics for the better. A winner of the Nobel Peace Prize and a leading architect of the Belfast (Good Friday) Agreement, he championed democracy over violence and played a huge role in setting Northern Ireland on the path to peace”.

The Prime Minister finished by sending his thoughts to Lord Trimble’s family, adding that they “should know that David’s legacy and achievements will never be forgotten”.

He was elected as the Leader of the UUP in 1995 and elected First Minister of Northern Ireland in 1998. He led the UUP negotiating team into the final round of talks arranged by the United Kingdom and Irish governments resulting in the conclusion of the Belfast Agreement in April 1998 (Good Friday).

Along with Irish politician John Hume, Lord Trimble was awarded the Nobel Peace Prize in October 1998 for his efforts in achieving a peaceful solution to the conflict in Northern Ireland.

He was appointed to the Privy Council of the United Kingdom in the 1998 New Year Honours.

He was appointed as a life peer in 2006 and was created Baron Trimble, of Lisnagarvey in the County of Antrim (the original name for his home town of Lisburn). He sat in the House of Lords as a crossbench peer before joining the Conservative Party and Conservative benches in 2007 in order to exert more influence in United Kingdom politics.

Lord Trimble was a foreign observer on an official Israeli investigation into the Mavi Marmara Gaza-bound flotilla in 2010, which found that the interception of the flotilla by Israeli forces did not contravene international law.

CFI send our deepest sympathies to Daphne and the family. May his memory be a blessing.