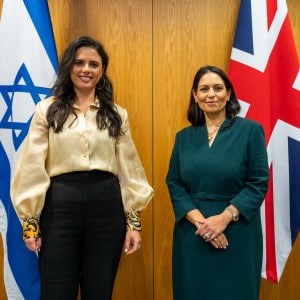 The UK Government has reaffirmed its commitment to furthering ties with Israel this week as Chancellor of the Exchequer Rishi Sunak and Home Secretary Priti Patel met with their Israeli counterparts against the backdrop of the Jerusalem Post London Conference.

On Wednesday, the Chancellor, Rt. Hon. Rishi Sunak MP, met with Israel’s Finance Minister Avigdor Liberman. In a tweet the Chancellor explained that the two “discussed the ambitious UK-Israel Free Trade Agreement”. He also offered his condolences over a terror attack that occurred in Israel the night before.

The Home Secretary, Rt. Hon. Priti Patel MP, on Thursday welcomed Israel’s Interior Minister to the Home Office. In a tweet after the meeting, she expressed that “there are so many issues on which the UK and Israel can cooperate” including the “global fight against terrorism”.
The Interior Minister tweeted her thanks to the Home Secretary, expressing that it was a “fruitful meeting” and that she is looking forward “to further cooperation on our common goals”. She also stated that Priti Patel’s “vital voice against terror is loud and clear”.

The Chancellor and the Home Secretary both echoed other UK Cabinet member voices in reference to the UK’s support of Israel during this period of escalated terror attacks. Rishi Sunak assured the Finance Minister that “the UK stands with the people of Israel against terrorism”, and Priti Patel highlighted that “we stand shoulder to shoulder with Israel”.