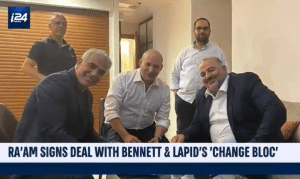 Just 30 minutes before his mandate to form a government expired at midnight on Wednesday, Yair Lapid, leader of the centrist Yesh Atid party, announced he had struck a coalition deal drawing support from across Israel’s political spectrum.

After informing Israeli President Reuven Rivlin that he had secured a majority in the Knesset (Israel’s parliament) under the deal, Mr Lapid said: “The government will do everything it can to unite every part of Israeli society”.

Under the terms of the agreement, Naftali Bennett, leader of the right-wing nationalist Yamina party, will serve as Prime Minister for two years before handing the role to Mr Lapid.

Islamist party Ra’am will form part of the coalition, it was announced, marking the first time in Israel’s history that an Arab party has agreed to join a government.

Ra’am party leader Mansour Abbas said last night that the coalition would “benefit the Arab public”. Mr Abbas posed for a photograph (below) alongside Mr Lapid and Mr Bennett as they prepared to sign the coalition agreement.

The coalition still needs to be approved by the Knesset in a vote next week, while Mr Netanyahu’s party Likud is reportedly hoping to derail the process by persuading members to switch sides. One MK from Mr Bennett’s Yamina party, Amichai Chikli, has already refused to join the coalition and another Yamina MK, Nir Orbach, on Wednesday night announced he may vote against the new coalition, a move that could potentially end the prospective razor-thin government.

The announcement came as the Knesset elected Israel’s new President on Wednesday, Isaac Herzog, who will replace Reuven Rivlin in July and serve a seven-year term. The role is ceremonial, with power concentrated in the hands of the Israeli parliament and the Prime Minister.

The Knesset must now schedule a vote of confidence in the new government. As the next plenum session is not until Monday 7th June, it would only be then that the Knesset Speaker, Likud’s Yariv Levin, is formally informed that he needs to schedule a vote on the new government. Mr Levin then has up to a week to schedule that vote, so it may only be held on June 14, giving PM Netanyahu and his supporters 12 days to try to deprive Lapid and Bennett of their majority.

If the emerging government is sworn in, Israel will have a new Prime Minister for the first time since 2009. The agreement may bring an end to Israel’s worst political crisis in modern history, which has seen four inconclusive election results since April 2019.