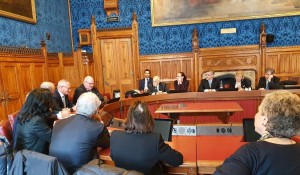 This week, CFI Honorary President Lord Polak CBE hosted a group of senior leaders from the Anti-Defamation League (ADL) for a range of meetings in Parliament discussing rising levels of antisemitism and extremism in the UK and worldwide.

The delegation met with Conservative parliamentarians including CFI Parliamentary Chairman (Lords) Rt. Hon. Lord Pickles, who gave the group an overview of his work as the UK’s Special Envoy for Post-Holocaust Issues.