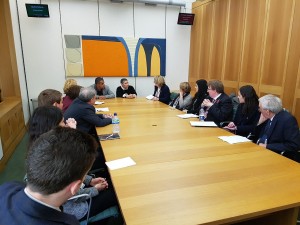 This week, Conservative parliamentarians attended a cross-party briefing event in Parliament hosted by CFI and LFI with the Parents Circle – The Bereaved Families Forum.

The Bereaved Families Forum is a joint Israeli-Palestinian organisation made up of more than 600 bereaved families, whose common bond is the loss of a close family member to the conflict.

At the briefing, Israeli Co-Director of the Parents Circle, Robi Damelin, and Palestinian Co-Director, Mazen Faraj, shared their stories of loss and their unique choice of reconciliation with the parliamentarians.

Robi Damelin joined the Parent’s Circle after her son David was killed by a Palestinian sniper in 2002 while guarding a checkpoint near a settlement during his army reserve service. Mazen Faraj, who lives in the Daheshah refugee camp in Bethlehem in the West Bank, spent several years of his youth in Israeli prison. In 2002, Mazen’s father aged, 62, was killed by an Israeli soldier, mistaking his bags for something else. He said that he chose the way of reconciliation and joined the Parents Circle to work towards justice and peace.

The directors of the organisation explained the NGO’s programmes, including the Parallel Narrative Project, which brings together Israeli and Palestinian journalists, public figures, teachers, social workers and civil society leaders to explore each other’s narratives.

Damelin and Faraj underlined that only with a reconciliation between Israelis and Palestinians, will true peace be achieved.