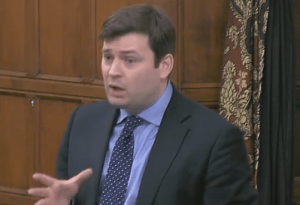 Robert Largan MP raised concerns about textbooks and curriculum used in UNRWA funded schools in the West Bank and Gaza, during a Westminster Hall debate this week on ‘Middle East Peace, Security and Development and UNRWA’. Identifying that UNRWA uses the official Palestinian Authority school curriculum, he pointed out that a recent “European Union review found that textbooks on that curriculum contain a number of examples of extensive antisemitism and incitement to violence”.

Foreign Office Minister Vicky Ford MP “urge[d] the Palestinian Authority to remove problematic content from its textbooks”. She added that the UK Government have had “robust conversations with the highest levels of the Palestinian leadership, challenging them on the need to prepare their population for peace, including by promoting a positive portrayal of others”.

The Foreign Office Minister explained that the UK believes “that honest and open discussions, rather than imposing sanctions or supporting anti-Israeli boycotts” are the best methods to “support our efforts to get progress on peace and on getting a negotiated solution”. She added that the UK Government “will engage with Israeli and Palestinian leaders to support co-operation on building stability and economic development”.

In March, a senior UAE official reportedly criticised the controversial school curriculum as being “a threat to Palestinians…and the whole region”. Following this, CFI Parliamentary Chairman Rt. Hon. Stephen Crabb MP stated that the “material is extremely detrimental to the wellbeing of Palestinian children and makes peace harder to achieve”.

Last year, the EU made a commitment to oversee an improvement in the content of Palestinian textbooks. An EU spokesman said: “We will not let off until we see change happen and we get assurances that no questionable content in books are in use”, adding that “one would have to draw conclusions” if the PA failed to change.

The Palestinian Prime Minister, Mohammed Shtayyeh, told a PA cabinet meeting that “everything mentioned in the textbooks is an accurate and honest description of the suffering our people have been going through for more than seven decades” and has rejected calls to make changes to the school textbooks.