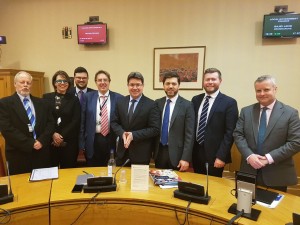 Israel’s Science and Technology Minister Ofir Akunis MK, visited London this week and met with Conservative MPs and peers at a CFI briefing event in Parliament.

Deputy Ambassador at the Israeli Embassy to London, Sharon Bar-Li, was also present.

In the briefing, Minister Akunis spoke about his policies to promote engagement in science and technology in the Israeli population, including the ‘Computer for Every Child’ initiative, which provides access to technology to the poorest children in Israel – across all communities.

Minister Akunis answered questions from parliamentarians on a number of issues, including the peace process with the Palestinians, Iran’s involvement in Syria, oil and gas, and BDS.

Mr Akunis has served as Minister of Science and Technology since 2015, and is a Member of the Knesset for the Likud Party.