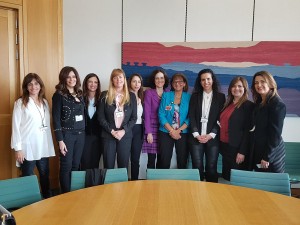 The delegation, coordinated by the British Embassy in Israel and the Department for International Trade, was made up of 8 leading businesswomen from Israel, including directors in public companies as well as CEOs in private firms.

Theresa Villiers, the former Secretary of State for Northern Ireland, and former Pensions Minister Baroness Altmann, led a wide-ranging discussion about the role of women in politics and public life in both the UK and Israel.

Drawing on their own experiences, both Conservative parliamentarians expressed that while the gender balance in Parliament remains inadequate, there have been significant improvements in recent years.

The group welcomed the latest UK-Israel trade figures released last week, with bilateral trade reaching a record high of £6.9 billion in 2017 – an increase of 25 percent from 2016.

In a separate event to mark International Women’s Day, CFI’s Projects Director Einat Shazar was among panellist at a WIZOuk event, where she spoke about women in political life and the gender balance in Parliament.