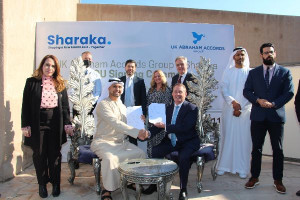 Conservative MPs this week joined a cross-party parliamentary delegation to the United Arab Emirates (UAE) led by the UK Abraham Accords Group Chairman Rt. Hon. Dr Liam Fox MP to observe the progress made since the signing of the historic Abraham Accords between Israel, the UAE and Bahrain in September 2020.

In the group’s first ever overseas delegation since it was founded last year, MPs met UAE government ministers and business leaders, UAE Ambassador to the UK H.E. Mansoor Abulhoul, British Ambassador to the UAE H.E. Patrick Moody, as well as visiting the Expo 2020 Dubai and counter-extremism organisation Hedayah.

The UK Abraham Accords Group also signed a cooperation agreement with coexistence NGO Sharaka at an event at the Crossroads of Civilisation Museum in Dubai.

At a reception held by the British Chamber of Commerce in Abu Dhabi, Dr Fox emphasised: “Here is a chance for us to shape history rather than be shaped by history.

It’s a chance for us to shape the region and its future, and particularly that of young people – breaking away from the constraints of the past to a more optimistic outlook for the years to come”. He added: “We’re very proud to have played a very small part in trying to alert the world, particularly in the UK, about the benefits of the Abraham Accords. The leaders in the UAE deserve great credit for their courage and their wisdom. We salute them, and we will do everything we can to help them in this process”.

CFI’s Parliamentary Chairman Stephen Crabb thanked the UAE’s Ambassador to the UK H.E. Mansoor Abulhoul for welcoming the cross-party group to the country, stating that it was a “fascinating and uplifting look at the growing ties between Israel and Arab states” and “one of the most important international developments for decades”.