Foreign Secretary Raab calls for Iran to return to “full compliance” of JCPOA, as it confirms 60% uranium enrichment 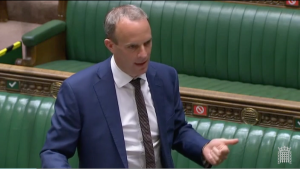 Foreign Secretary Dominic Raab underlined that “Iran must return to full compliance” of the Joint Comprehensive Plan of Action (JCPOA), as it was confirmed this week that the country is producing 60% enriched uranium.

In Foreign, Commonwealth & Development Questions this week, Greg Smith MP asked the Foreign Secretary: “Given that this knowledge cannot be unlearned, does my right hon. Friend share my concern that Iran’s nuclear activities already extend far beyond the outdated JCPOA? What steps will he be taking to address not only Iran’s nuclear belligerence but its support for terrorism and the ballistic missile programme?”

Foreign Secretary Raab agreed in response that “It is not just the stockpile of enriched uranium, which is 16 times the permitted limit, but the operation of the centrifuges and the production of uranium metal that are of deep concern”.

He added that “there has been some progress in the talks in Vienna, but a successful outcome is far from guaranteed”. In the House of Lords on Thursday, CFI Honorary President Lord Polak CBE highlighted the Foreign Secretary’s comments and asked the Minister what the G7 summit’s “solutions and concrete actions” are “in relation to Iran”.

On Tuesday, Iran said that it produced 6.5kg of uranium which it has enriched to 60% purity as well as 108kg which in enriched to 20% purity in only 5 months. This is far ahead of the schedule set by a law passed earlier.

The development draws Iran closer to the 90% purity levels needed for nuclear weapons. This comes amid talks in Vienna between Iran and world powers about revitalising the 2015 nuclear deal which limited Tehran’s nuclear programme in exchange for relieving sanctions.

Since Donald Trump’s administration withdrew from the deal in 2018, Iran has been increasingly violating the terms of the JCPOA.