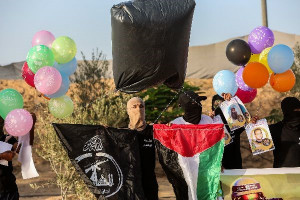 Gaza-based terrorists again breached their ceasefire with Israel this week, launching incendiary balloons on Thursday which sparked four fires near Israeli towns along the southern border. The arson attacks disturbed two weeks of peace since the last waves of attacks in June, which sparked at least 20 fires.

In response to these attacks, Israeli airstrikes hit a Hamas training and weapon manufacturing site, as has been confirmed by the Islamist group.

There have been no casualties reported. The incendiary balloon attacks are said by Palestinians to be a method of pressuring Israel to ease restrictions on the Israel-Gaza border which had recently been tightened due to the flare-up in May.

When restrictions were loosened in June, to allow in fuel, extend Gaza’s fishing zone and permit increased cross-border trade, the balloon attacks momentarily subsided. This is the third time Israel has struck Hamas military infrastructure since the ceasefire ending the 11-day conflict in May in response to incendiary devices being launched from Gaza.

The IDF has been told to prepare for a range of circumstances which could result from the most recent exchange.