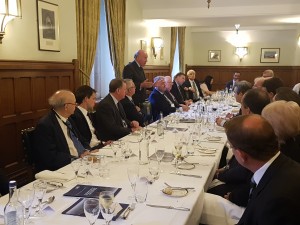 This week in Parliament, cross-party MPs and Lords attended a lunch briefing with General Lord Dannatt, former Chief of the General Staff of the British Army, hosted by the Friends of Israel Initiative.

Lord Dannatt is a member of the High Level Military Group (HLMG) along with Colonel Richard Kemp who was also present at the lunch. He referred to a recent HLMG assessment of Hezbollah in Lebanon which suggests how to “prevent a third Lebanon war”.

Lord Dannatt addressed parliamentarians before receiving questions, underlining that Iranian proxy Hezbollah “creates an existential threat to Israel”. He added that Hezbollah’s rockets are able to “strike targets in the length, depth and breadth of the country”.

Lord Dannatt emphasised that there is no distinction between Hezbollah’s military and non-military activities, rejecting the “artificial understanding of political and military wings of Hezbollah”.