Hamas leader Sinwar: ‘God has decreed that we must attack Tel Aviv’ 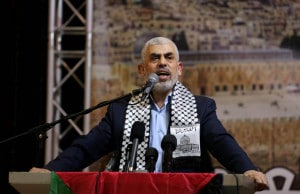 Hamas leader Yahya Sinwar told a group of academics in Gaza on Saturday that the terror group has the capability to demolish Tel Aviv and that Israel only destroyed 3 percent of Gaza’s terrorist tunnel network in the latest conflict, according to Israel’s Maariv newspaper.

“God has decreed that we must attack Tel Aviv, and there are other capabilities we have not revealed,” Sinwar said.

He continued that Hamas and its terrorist partners could “destroy Tel Aviv” by launching 130 missiles per minute, and he also criticised Arab countries that signed normalisation deals with Israel with the Abraham Accords.

Sinwar has been the leader of Hamas in the Gaza Strip since February 2017.