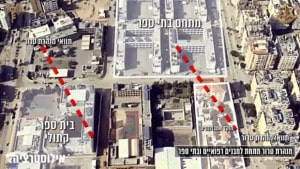 A network of Hamas terror tunnels under densely populated civilian areas in Gaza was exposed by the IDF on Wednesday, including three new tunnels constructed since last year’s conflict.

The IDF released drone footage and coordinates which reportedly showed a terror tunnel constructed by Hamas near a Pepsi factory, a weapons manufacturing site near the Shifa hospital, a weapons storage facility near a UN Relief and Works Agency (UNRWA) primary school and medical clinic as well as other military locations. The UNRWA school is also used as a shelter for around 2,500 civilians, and the clinic serves 15,000 local Gazans.

The Hamas tunnels are located under “buildings that are essential for civilian life”, according to the IDF, having been built there “in the knowledge that a strike on those targets will be provocative” and “if the tunnels collapse, hospitals, mosques, universities, or factories will collapse with them”.

The IDF also confirmed that a weapons storehouse and the entrance to a tunnel were also found in the homes of two Hamas operatives.

Israeli Defence Minister Benny Gantz said that Israel will act with “precision and force” to defend its citizens. “Hamas launches attacks from within population centres and targets population centres – the world must be aware of this crime against humanity and must exact a heavy price from Hamas”, he added.

More than 100 kilometres of Hamas’ underground terror tunnel network was destroyed in last year’s Israel-Hamas conflict, though it is not publicly known how many of the tunnels have been rebuilt.