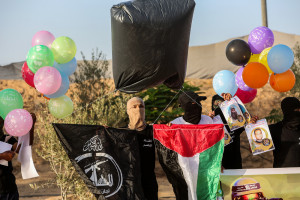 The IDF struck a number of targets in the Gaza Strip late Thursday night in response to incendiary balloons that were launched from Gaza into Israel earlier in the day which led to around eight fires in Israeli communities near Gaza.

On Friday morning, rocket sirens were heard in Kfar Aza which is an Israeli community along the Gaza border. The IDF later clarified that these sirens were not due to rocket fire but were the result of machine gunfire in the area.

No injuries were reported as the IDF warned Gazan residents in advance of their strike on 10 Hamas targets, N12 news reported.

The strikes were carried out in Khan Yunis, in Southern Gaza. This came after a number of fires broke out in southern Israel on Tuesday, with at least 20 fires sparked by incendiary balloons launched from Gaza.

Earlier on Tuesday, Palestinian media published photos of terrorists preparing to launch such balloons towards Israel. Recently, tensions between Israel and Hamas have reignited, following Hamas threatening to escalate attacks in response to the nationalist, and what many deemed provocative, Jerusalem Flag March in Jerusalem’s Old City on Tuesday.