International Trade Minister: “Israel is one of the Middle East’s most dynamic and innovative economies” 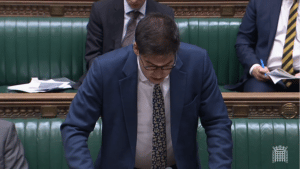 International Trade Minister Ranil Jayawardena MP championed Israel as “one of the Middle East’s most dynamic and innovative economies” at International Trade Questions this week. He detailed that in particular “there is a great opportunity in tech” and even outlined recent interest expressed by Brazil in a trilateral partnership in tech with the UK and Israel.

During the session Scott Benton MP asked the International Trade Minister for an update on the progress of the bilateral free-trade deal the UK Government is negotiating with our “close ally”, Israel. He expressed the trade deal would be important to both countries as it would “slash red tape and increase investment opportunities”.

In response the Minister said: “Of course we have a trading partnership agreement that was originally signed as one of the first continuity agreements back in 2019, but the Prime Minister announced last year that we would begin talks with Israel on an enhanced and improved UK-Israel free trade agreement”.

He explained that the Trade Department have had a public consultation on the topic of UK-Israel trade, and he is “looking forward to taking that work forward to boost our trade investment relationship an make sure that our further ambitions between both nations are secured”.