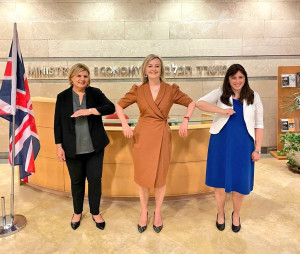 International Trade Secretary Liz Truss celebrated UK-Israel ties in her first ever visit to the Jewish state this week, ahead of an expected advanced free trade agreement between the two countries.

Israel’s ambassador to the UK, H.E. Tzipi Hotovely, also joined the meeting. Following the meeting, Secretary of State Truss said: “It was fantastic to meet the Minister of Economy and Industry Orna Barbivay. As two democratic free trading nations, both with thriving technology industries, I’m looking forward to deepening the historic ties between the UK and Israel”.

She added: “Together we will work to remove barriers to trade between our two countries and work towards an advance free trade agreement that supports jobs and drives growth”.

The International Trade Secretary said that she aims to build on the existing £5 billion trade partnership with Israel. The visit had been planned to take place early last year but was postponed by the pandemic and elections in Israel.