Iranian presidential favourite made his name as prosecutor on ‘Death Commission’ 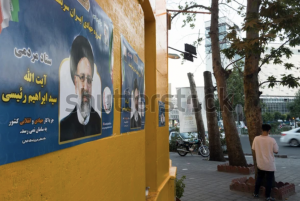 Empty polling stations today have confirmed fears of a low turnout, making it likely that chief justice Mr Raisi, who is favoured by the hardline regime will be voted in with little opposition. The exiled opposition and liberals in the country had called for a boycott of the vote.

Campaigners allege, that as deputy Tehran prosecutor, Raisi played a key part in the executions of thousands of opposition prisoners when he was part of a four-man “Death Committee” who marked convicts for execution without due process.

Raisi, who is seen by some Iranian media outlets as a possible successor to supreme leader Ayatollah Ali Khamenei, has denied involvement in the 1988 killings, but still publically praised them. Since 2019, he has served as the head of the Iranian judiciary.

Most human rights groups and historians say that between 4,000 and 5,000 were killed, in a process the UN said that “may amount to crimes against humanity”. If elected, he will succeed Hassan Rouhani, who has to stand down after serving two terms.