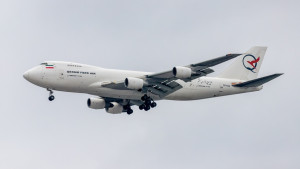 The Iranian airline Qeshm Fars Air – controlled by the Islamic Revolutionary Guard Corps (IRGC) – has reportedly operated a minimum of seven flights to Moscow since April, amidst speculation that Iran is providing weapons and fighters to Russia for its invasion of Ukraine. The airline has been accused numerous times of carrying weapons and soldiers to its partners to help them evade sanctions, and there are concerns that Iran could be attempting to transport Syrian mercenaries into Russia.

Qeshm Far Air not only operates illicitly in Syria, but around the world. Over the last two years it has regularly travelled to Venezuela and during the conflict between Ethiopia’s central government and the Tigray rebels, it flew to Ethiopia’s capital of Addis Ababa at least seven times. The airline has also regularly flown cargo to Macau, Myanmar, and Tajikistan. According to retired U.S. Admiral Craig Faller, it is likely in at least some of these instances, Iran is using the airline to either transport military equipment or to help partners evade sanctions.
Therefore, Qeshm Fars Air could be aiding the transport of Syrian mercenaries to Russia, to help alleviate its manpower shortage in Ukraine, with Washington reporting in March that Russia was attempting to bolster its forces through recruitment of Syrians.

It remains unclear what the Iranian airline is specifically transporting to Russia, but given the accusations that Russia is committing war crimes and mass atrocities in Ukraine analysts believe it provides the U.S. with another reason to not delist the IRGC from its terror watch list.