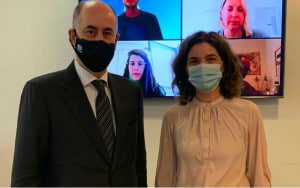 On Wednesday at her office in Jerusalem, Israel’s Environmental Protection Minister Tamar Zandberg met with Jordan’s Ambassador Ghassan Majali to discuss “cooperation between the countries in the fields of environment and climate”, the Minister’s office said in a statement.

As part of the meeting, the two discussed the restoration of water flow through the Jordan River and on to the Dead Sea, and removal of pollution on the Israeli side.

The meeting comes after the two countries signed the largest-ever cooperation agreement in November 2021. It will see the construction of a major solar powerplant in Jordan to generate electricity for Israel, while a desalination plant established in Israel will send water to Jordan. The Environmental Protection Ministry said the joint work between Zandberg and Majali will “improve the environment and life of the residents of the two countries, as well as of the Palestinians in the West Bank”.

“The renewal of relations between Israel and Jordan brings with it a great and extraordinary opportunity to strengthen ties between the two countries,” Zandberg was quoted as saying after meeting with Majali.