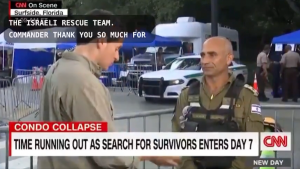 A search and rescue team and engineering experts from the Israel Defence Force landed in Miami on Sunday, in response to the collapse of a 12-story building in Surfside, Miami. Alongside them a six person PCRU team from United Hatzalah arrived at the site.

16 people have been found dead as a result of the tragedy, with 147 people still unaccounted for. Many of the victims have been reported as “emotionally destroyed”.

One responder said: “When you’re sitting with them and trying to help them deal with such a situation it tears your heart apart”.

Golan Vach, the colonel heading the Israeli troops said it was the worst level of destruction he had ever seen, in decades of experience. After evacuating the residents, Hatzalah brought in doctors to write prescriptions, which were paid for by the Israeli consulate.

Unit 9900, a secret Israeli intelligence unit, also created 3D maps of the Miami block to “allow the Home Front Command delegation to further assist in the rescue efforts and navigate through the rubble more quickly and effectively”.