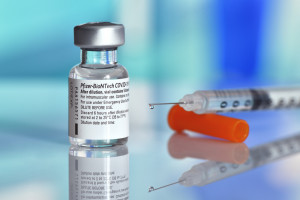 Israel plans to transfer around 1.2 million Pfizer vaccines to the Palestinian Authority (PA) in the coming days to help them with their coronavirus vaccination campaign, the Prime Minister’s office announced today.

The first 100,000 doses were transferred to the Palestinian Health Ministry in the West Bank today, the Coordinator of Government Activities in the Territories (COGAT) said.

Foreign Minister Yair Lapid today said: “We will continue to find effective ways to cooperate for the benefit of people in the region”.

Most of the vaccines in question are due to expire in around six weeks, and the joint statement from the Prime Minister’s Office and the ministries also emphasised that the decision was undertaken as Israel’s current vaccination needs are met.

The move was finalised during a meeting on Thursday between new Health Minister Nitzan Horowitz and senior Health Ministry officials. The decision to supply the vaccines had been taken by the previous government under Benjamin Netanyahu, but there had been no follow through on the decision.

The PA has begun receiving vaccines through COVAX, a global vaccine programme for poor and middle-income countries backed by the World Health Organisation.

They aim to provide enough free doses to immunise up to 20% of a participating country’s population; around 90 countries have signed up for the programme.

The PA have so far received 100,000 doses from China and 58,000 from Russia. Most of the remainder were AstraZeneca doses sent through COVAX.

According to UNICEF, COVAX intends to eventually provide about 400,000 AstraZeneca vaccines to the Palestinians.

The Palestinians suffered their worst COVID-19 wave in March and April, which peaked at almost 3,000 new cases a day. However, following a strict lockdown, figures have dropped to some 250 cases daily.