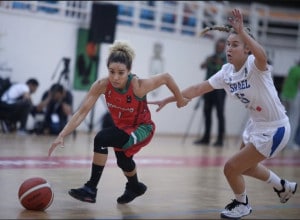 The Israel women’s basketball team faced off against their Moroccan counterparts in a historic friendly match this week to mark the normalisation of ties between the two countries.
The match, the first time a female Arab national team has hosted an Israeli side, was held in front of invited guests only, and finished 62-58 to the hosts, with Daniel Raber leading the scoring for Israel with 18 points. The day before the game, the Royal Moroccan Basketball Federation and the Israel Basketball Association signed an agreement to develop sports exchanges, such as friendly matches at all levels, and participation of Moroccan coaches in training courses run by Israel. The national team head coach, Sharon Drucker, described the trip in positive terms saying “I had no idea as to what kind of a buzz this was going to make here and from the moment we arrived we have been surrounded by people who just want to do good, help and contribute and I believe that this is a historical cooperation between the two nations”.
This game and sporting agreement come amidst a backdrop of warming relationships between the two countries, starting officially with the recognition by Morocco of Israel in late 2020, and developing to the signing of a defence agreement in November 2021. Israelis can now even fly directly from Ben-Gurion to Morocco on El Al and other carriers, with the Tel Aviv – Marrakesh route having opened in July 2021.