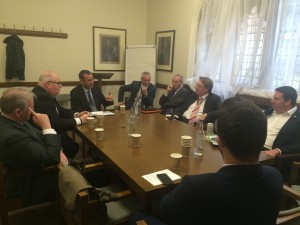 Ambassador for Israel, H.E. Mark Regev met with CFI’s Parliamentary Officers this week in Parliament to discuss a number of issues related to Israel.

The Ambassador addressed the MPs on a number of issues including UN Secretary General Ban Ki-moon’s visit to Israel this week, Israel’s reconciliation deal with Turkey, and the French Middle East peace initiative.