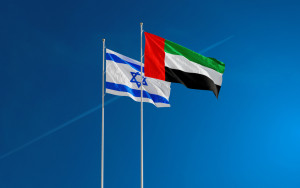 The visit, which was not announced until the Prime Minister landed in the UAE capital of Abu Dhabi, began with Bennett being welcomed at the airport by UAE Foreign Minister Abdullah bin Zayed and a guard of honour, before travelling to meet the new President.

Bennett reportedly offered his condolences to President Zayed al Nahyan and the Emirati people on the passing of his half-brother, Sheikh Khalifa bin Zayed al Nahyan, and spoke of the important role the late Sheikh had played in working towards peace in the Middle East.

During the meeting, Bennett stated that Israel looks forward to working with him as the new President and continuing with the UAE to expand cooperation between the two nations. The UAE President thanked Bennett for his warm feelings towards the UAE, and wished Israel stability and prosperity.

The two leaders discussed further cooperation and development opportunities such as financial investment, the health sector and food security.