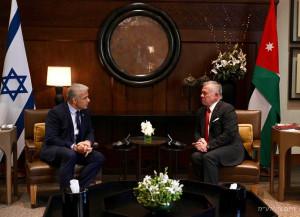 They also reiterated goals for increasing tourism, with initiatives in the Gulf of Aqaba and Eilat.
Statements by the Royal Hashemite Court expressed Jordan’s hope for a “comprehensive, lasting peace on basis of the two-state solution” and those efforts to bolster regional stability “must include Palestinians”.

The two leaders discussed the need to expand regional cooperation in security, trade, and infrastructure.

They met at the Royal Palace in Amman on Wednesday, following the King’s meeting with Palestinian Authority President Mahmoud Abbas last week.