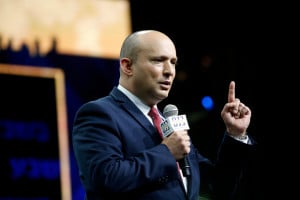 Israeli Prime Minister Naftali Bennett landed early on Wednesday in the United States for his first official visit overseas since taking office in June 2021, during which he is expected to meet with US President Joe Biden on Thursday.

The Israeli Prime Minister, who landed at Joint Base Andrews in Maryland, is scheduled to meet with senior US administration officials, including Defence Secretary Lloyd Austin and Secretary of State Anthony Blinken, on Wednesday.

The state visit comes as tensions increase between Israel and Iran, and as Israel continues to face a gradual resurgence of conflict on its southern border with the Gaza strip.

He stressed that the leaders would also discuss the preservation of Israel’s qualitative military edge in the Middle East and strategies to combat the ongoing coronavirus pandemic, as well as several economic matters.

In a statement released before his departure by the Prime Minister’s Office, Mr Bennett stated that the priority for his conversation with President Biden will be the heightened unease which surrounds “the leapfrogging in the past two to three years in the Iranian nuclear programme”.

Mr Bennett has recently spoken out against the possibility of a new nuclear accord between world powers and Iran, with a recommendation that any agreement must also ensure that Iran’s regional aggression is brought to a definitive end after reports that the country has increased the enrichment of its uranium for alleged nuclear weaponry.

Earlier this week, he reportedly told the cabinet he would inform the US President that “now is the time to halt the Iranians” and avoid reentering “a nuclear deal that has already expired and is not relevant, even to those who thought it was once relevant”. The Israeli Prime Minister sought to reiterate this stance on a video call with US congressmen on Tuesday.