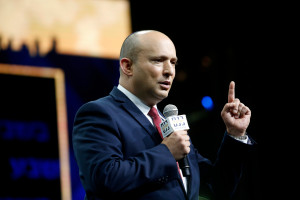 Israeli Prime Minister Naftali Bennett has announced he intends to dissolve the Knesset and call new elections – Israel’s fifth in three and a half years. Prime Minister Bennett said he left “no stone unturned” in trying to keep the coalition alive but reached an impasse in his failure to extend long-standing legislation which applies Israeli civil law to the West Bank. Foreign Minister Yair Lapid will become the new interim prime minister until new elections can be held in October. Benjamin Netanyahu’s Likud Party leads the current polling, although reports indicate he would still fall short of a majority, and might yet look to form an alternative coalition government within the current Knesset before it’s dissolution.

The announcement was made on Thursday afternoon, in a statement by Israeli Prime Minister Naftali Bennett and Foreign Minister Yair Lapid. In his statement, Bennett praised the coalition for proving “you could put disagreements aside for the sake of the state” and that it had “boosted national dignity”. Lapid also expressed his gratitude to Bennett and said he had “put the country before his personal interests”. Bennett said he hopes to provide an “orderly handover” for Lapid in the coming days.

Ahead of the Knesset’s anticipated dissolution, Finance Minister Avigdor Lieberman is looking to introduce a bill disbarring anyone under indictment on criminal charges from forming a government – his party are long-standing opponents of Benjamin Netanyahu.

The historic coalition had been faced with several crises over the last few months, following the resignations of Yamina MK Idit Silman and Meretz MK Rinawie Zoabi, with Yamina MK Nir Orbach’s resignation last week, leaving the coalition with only 59 seats. Bennett and Lapid have decided to finally end the coalition themselves, citing the anticipated defeat of legislation concerning the West Bank. The legislation would renew the application of certain Israeli laws to the West Bank and although the opposition supports the legislation in principle, they have decided to vote against it to destabilise the government. Bennett said regarding the law: “Last Friday, I was told by security officials and lawyers that with the [scheduled] expiration of the Judea and Samaria regulations [at the end of June], the State of Israel will fall into chaos. I will not allow this”. The Knesset’s dissolution automatically causes the legislation relating to Israeli civil law in the West Bank to be extended for up to six months.

This will be Israel’s fifth general election in under three and a half years and both Bennett and Lapid have agreed upon the principal date of 25th October, but a formal election date is yet to be finalised. The coalition, which was formed last year, cited keeping former Israeli Prime Minister Benjamin Netanyahu out of government as one of its key motivations and this motivation was used to stop previous rebellions. Netanyahu called the dissolution “great news for millions of Israeli citizens” and said his Likud Party would form a “wide national government”. The election is still many months away but recent polling from Israel’s Channel 12 TV indicates Netanyahu would win the largest number of seats in a new election, though would fall two seats short from a majority.