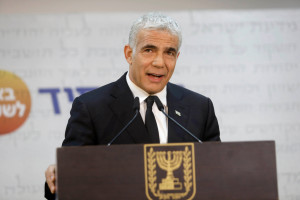 Foreign Secretary Liz Truss this morning tweeted that she was “looking forward” to continuing to work with her “good friend” Yair Lapid after he became Israel’s incumbent Prime Minister at midnight. She added that the “UK-Israel relationship continues to go from strength to strength, bringing prosperity and upholding security for both nations”.

Former-Prime Minister Naftali Bennett led Israel’s varied coalition for over a year, before being replaced by Foreign Minister Yair Lapid, Israel’s 14th Prime Minister, in the early hours of the morning. The swapping of the leaders was prearranged between the two when they formed the government last year and followed the dissolution of the 24th Knesset; Lapid will be Prime Minister until Israel holds its fifth election in under four years on 1st November.

Although Lapid’s tenure as Prime Minister is a short one, during the handover ceremony on Thursday afternoon he stated that his government will “do the best we can for a Jewish, democratic state, good and strong and thriving, because that is the job, and it’s bigger than all of us”.

It has been reported that Lapid intends to focus his initial work on Israel’s security. This morning the Prime Minister of Israel twitter account released pictures from the “extensive security-intelligence briefing” Lapid held with Ronen Bar the Director of Israel’s Security Agency. It has also been suggested that he will also hold a meeting to discuss “the captives and MIAs”, the Israelis and remains currently being held by Hamas in the Gaza Strip.

Former-Prime Minister Naftali Bennett announced this week that he will no longer be running in the November election, handing over the leadership of Yamina to his political partner Ayelet Shaked, however he will stay on as Alternate Prime Minister during Lapid’s tenure.

For the past year, Prime Minister Lapid has held the role of Deputy Prime Minister as well as Foreign Minister, duties of which he will continue now he leads the government. As Foreign Minister, Lapid furthered the normalisation between Israel and several Arab Nations, a feet that can be seen through the Negev Summit which was held in Israel in March 2022 and attended by his counterparts from Egypt, Morocco, Bahrain, the UAE and the United States.

Before his political career Yair Lapid had a successful TV career in Israel. He entered politics in 2012 when he created his party Yesh Atid, whose name means ‘there is a future’. It soon became the second largest party in Israel, behind Likud who’s leader was Benjamin Netanyahu. Between March 2013 and December 2014 Lapid held the position of Finance Minister in Netanyahu’s government.