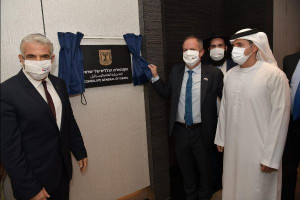 A year after Israel and the UAE agreed to normalise relations, Yair Lapid, Israel’s Foreign Minister, arrived this week in Abu Dhabi for a two-day visit – the first ever official Israeli visit to the country.

Later, Lapid attended the opening of the Israeli embassy in Abu Dhabi, a place he called, “a centre of cooperation”, solidifying ties between the allies, as well as meeting with other Emirati officials and representatives of Jewish communities living in the UAE.

Lapid tweeted that he was “proud to represent the State of Israel on its first official visit to the United Arab Emirates”, and thanked his Emirati counterpart for the warm welcome. He described his visit as “historic”.

Meanwhile the chief rabbi of the UAE stated: “The Jewish community in the UAE is thrilled by what this trip represents: a growing bond between the UAE and Israel”.

Since the signing of the Abraham Accords over nine months ago, Israel and the UAE have signed extensive trade deals, with trade between the two already estimated to be worth $354 million.

A bilateral Agreement on Economic and Trade Cooperation was signed on the 29th June between the two countries with an aim to develop a free flow of goods and services as well as improving economic relations.