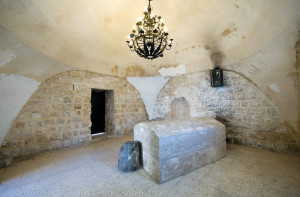 The tomb of the biblical figure Joseph in the West Bank city of Nablus has become a flashpoint for violence this week, after Palestinian rioters vandalised the holy site on several occasions. The attack, deemed “extremely serious” by the Israeli Defense Minister Benny Gantz, comes after rising tensions in the wake of a series of deadly terror attacks across Israel in recent weeks which led to Israeli forces carrying out raids in the West Bank.

Palestinian rioters damaged the gravestone, chandelier and surrounding utilities before setting fire to the tomb. The tomb was previously set on fire in 2015 and 2000 during Palestinian riots. The territory of the tomb, on the outskirts of the city of Nablus, falls within the Palestinian Authority, requiring Israeli’s to coordinate with the IDF when they wish to visit the site.

Joseph was, according to Old Testament, the son of Jacob and was given a colourful coat by his father, before being sold into slavery and eventually rising to be governor of Egypt. The tomb remains a sacred site for many Jewish people – as well as Muslims – and the act has received widespread condemnation in Israel. The Israeli Foreign Minister Yair Lapid called the images “shocking” and an attack on the “deep beliefs of the Jewish people”. According to IDF spokesman Brigadier General Ran Kochav a number of perpetrators had been caught by Palestinian security services.

Afterwards, on Sunday night two men from the Breslov Hasidic community were shot and moderately wounded by Palestinian terrorists, after breaking through an unmanned checkmate in an attempt to visit Joseph’s Tomb and help restore the site. Both were given aid when reaching an Israeli checkpoint and were taken to Beilinson Hospital.

On the following Wednesday morning, IDF troops clashed with Palestinians whilst conducting raids to arrest the tomb’s vandals and secure the restoration of the sacred site. The Palestinian Red Crescent reported that 31 Palestinians were injured during the clashes leaving one Palestinian dead. A member of the IDF also sustained non-serious injuries during the clashes. The IDF reported that they have arrested one man under suspicion that he was also responsible for vandalising the tomb, further arresting three others reported to be member of Hamas.