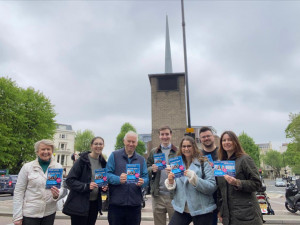 Prime Minister Boris Johnson admitted that it was a “tough night” for the Tories “in some parts of the country”. The Conservative Party defied expectations with a much stronger showing in the Local Elections across England than expected, despite the Labour Party’s hope of making substantial gains. Although, the Conservatives lost overall control of Westminster, Wandsworth and Barnet, the party was able to win several council seats in those areas, thanks to the fantastic support of activists and voters.

The Labour party failed to deliver on its ambitions to win several strongly contested councils across England, with modest showings in these regions. In high profile councils such as Hartlepool, Peterborough, Redditch and Ipswich, the Conservatives stopped any Labour advances, with Labour also unable to reclaim its former strongholds in the North.

Prime Minister, Boris Johnson took to twitter on Friday morning to thank all those that voted for the party in the local elections as well as all the supporters and activists across the country who “support our plan to keep council taxes low”.

The Conservative Party co-chair, Oliver Dowden has said that although he is “disappointed” over the losses in London, and believes they are “more consistent with what you would expect in midterm in urban areas”, he is remaining optimistic for the future as he does not believe “Labour have the momentum to form the next government”.

The CFI team would like to congratulate all the successful Conservative Council Candidates and would like to thank all CFI members who attended our series of campaign Action Days.