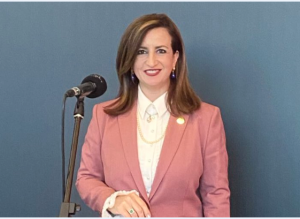 Meretz MK Rinawie Zoabi has returned to the coalition, ending the three-day political crisis for the Israeli government. Zoabi has made no statement on her reason for returning, but sources say she has agreed to return based on the release of millions of funding for Arab towns.

Zoabi returned to the coalition on Sunday, following urges from Arab society and the alleged promises from government leaders. She had originally left the coalition last Thursday, citing police clashes on Temple Mount/ Al Haram Al Sharif and the death of Palestinian journalist Shireen Abu Aqla.

Zoabi faced pressure from Arab mayors and the public following her resignation, who argued that her resignation could lead the way to a return of Benjamin Netanyahu to power. Shortly after her resignation, a campaign was launched on Arabic social-media networks for her to return, with protestors eventually congregating outside of her home in Nof Hagalil, on Saturday night. On Friday, Zoabi met with the President of the Palestinian Authority Mahmoud Abbas who also encouraged her to return to the coalition.

Zoabi’s return was announced following her meeting with Foreign Minister Yair Lapid and several Arab municipal leaders. While both Zoabi and Lapid have declined to detail any agreements that have been made, several regional mayors who were present, reported that Zoabi’s return should lead to “hundreds of millions” of shekels of delayed funding being released to Arab municipalities. Zoabi stated: “I will support the coalition. But I also want the coalition to be true and attentive to Arab society and its needs in health, education, housing, and infrastructure”.

Kfar Manda mayor, Ali Khadar Zidan has said that this is not a new allocation of funding, but rather part of an already agreed five-year plan to reduce inequality between Arab and Jewish towns. The plan was previously secured as part of the coalition negotiations with the Arab Ra’am party, which assured significant investment to address crime, infrastructure and other socioeconomic issues in Arab communities. However, a large portion of the money has yet to be received by municipal authorities, due to the funds having to be released by several different government ministries.