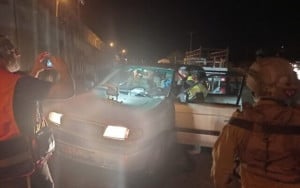 A 25-year-old Israeli man was killed and two men were injured in a shooting terror attack outside a settlement outpost in the northern West Bank on Thursday night.

The victim was named as Yehudah Dimentman, a father of one from the settlement of Shavei Shomron. The terror attack was reported along the road just outside the Homesh outpost, west of Nablus and north of Shavei Shomron, the Israel Defense Forces (IDF) said.

Medics performed CPR on Dimentman, who sustained a critical neck wound from the shooting, but were forced to pronounce him dead at the scene.

The other two victims sustained light injuries from broken glass and were taken by ambulance to Meir Medical Center in Kfar Saba, Israel, according to the Magen David Adom ambulance service. Middle East Minister Rt. Hon. James Cleverly MP today said he was “horrified to hear about the attack on 3 Israeli citizens near Nablus last night, in which a young man lost his life”.

Mr Cleverly added: “Our hearts go out to the family of Yehuda Dimentman. We fully support Israel’s right to ensure its security and bring the perpetrators to justice”.

Israel’s Prime Minister Naftali Bennett said in a statement that Israeli security forces would “soon get their hands on the terrorists” behind the shooting. He also sent his “heartfelt condolences” to the Dimentman family.