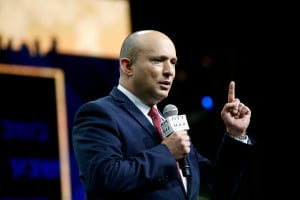 The Knesset erupted in cheers after agreeing that Naftali Bennett, leader of the right-wing nationalist Yamina party and former ally of Mr Netanyahu, will become the new Prime Minister, presiding over a diverse and fragile coalition. The new government has a razor-thin majority, passing with the support of 60 Knesset Members (MKs) while 59 opposed it. Ra’am (United Arab List) MK Saeed Alharomi abstained.

The coalition comprises of eight parties from across Israel’s political spectrum. In what is being dubbed a ‘coalition of firsts’, the coalition brings together right-wing, centrist, left-wing and Islamist parties.

Under the terms of the agreement, Mr Bennett will serve as Prime Minister for two years before handing the role to Yair Lapid, leader of the centrist Yesh Atid party. Mr Lapid will be serving as Foreign Minister until they rotate roles in 2023.

Today, the new ruling coalition laid out policy plans and gathered at the official residence of President Reuven Rivlin for a group photo. Mr Bennett has vowed that the new government would work to “mend the rift in the nation” after two years of political deadlock. Acknowledging the wide range of views within the new coalition, Bennett urged his ministers to show “restraint” over the numerous ideological differences between the parties to ensure the coalition’s stability.

Mr Bennett presented his new government’s ministers and guidelines in an address at the Knesset plenum, while opposition MKs heckled him. Mr Bennett said in response: “The loud tone of the screams is the same as the failure to govern during your term in office”.

Reacting to the Knesset’s vote on Sunday, Benjamin Netanyahu vowed to lead his Likud Party back to power and “topple this dangerous government and return to lead the country in our way”.

Mr Bennett and Mr Lapid have been congratulated by world leaders on their win, including Prime Minister Boris Johnson who said: “On behalf of the UK, I offer my congratulations to @naftalibennett and @yairlapid on forming a new government in Israel. As we emerge from COVID-19, this is an exciting time for the UK and Israel to continue working together to advance peace and prosperity for all”.

US President Joe Biden sent congratulations during a phone call and said he is looking forward to working with the Israeli Prime Minister “to strengthen all aspects of the close and enduring relationship between our two nations”. He added: “Israel has no better friend than the United States. The bond that unites our people is evidence of our shared values and decades of close cooperation and as we continue to strengthen our partnership, the United States remains unwavering in its support for Israel’s security”.

The vote has brought an end to Israel’s worst political crisis in modern history, which has seen four inconclusive election results since April 2019.

Islamist party Ra’am will form part of the coalition, marking the first time in 50 years that an Arab party has agreed to join a government in Israel.

Last Wednesday, just 30 minutes before his mandate to form a government expired at midnight,Yair Lapid, leader of the centrist Yesh Atid party, announced he had struck a coalition deal drawing support from across Israel’s political spectrum.