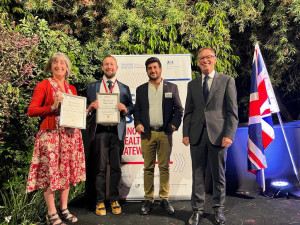 The UK-Israel Healthtech Gateway programme, developed by the UK-Israel Tech Hub at the British Embassy, will provide a platform for the entry and growth of Israeli companies within the NHS. As part of the programme, a Memorandum of Understanding between the Israel Innovation Authority and the Northern Health Science Alliance (NHSA) was signed in recognition of the joint commitment to accelerate innovation in health and life sciences.

The NHSA, a partnership of NHS hospitals and networks across the North of England, will provide support to Israeli tech companies by helping them build a business case for their technology when entering the UK and assisting with engagement with health professionals.

Ambassador Wigan explained that the British Embassy is “delighted” to be working with the NHSA “to build lasting bridges” between the health organisations in both countries, and went on to say that these initiatives are “pivotal to the development and expansion of the collaborative work” already being done.

The Director of the UK-Israel Tech Hub, Idan Fisher, explained that in recent years the “continuous spike in the flow of capital [has been] going both ways”. The Tech Hub has “witnessed the growing appetite in the British market for Israeli innovation” as well as a “growing number of Israeli tech companies choosing to grow and expand in the UK”.