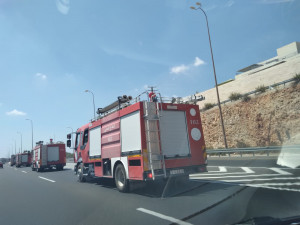 Palestinian Authority firefighters assisted Israeli firefighting forces on Tuesday in a battle to tackle the extreme wildfires in the hills and towns west of Jerusalem.

Four firefighting trucks and 20 firefighters and rescue workers joined the efforts to extinguish the wildfires, which have been the largest years.

According to a statement released by the Judea Fire Department, approximately 14 fire-extinguishing aircraft were operating near Har Eitan Tsuba, Givat Ye’arim to battle the fires, which began on Sunday and re-erupted on Monday afternoon.

Firefighters focused efforts to ensure that the fire was kept away from Hadassah-University Medical Centre, Eim Kerem.

Israel did, however, accept the offer by the Palestinian Authority to send several firefighter teams to fight alongside the Israeli division.

Senior PA Foreign Ministry official Ahmad al-Deek stated that “[they] often do work together with the Israelis on snuffing out fires”. Israeli and Palestinian firefighters have regularly performed joint training exercises, such as the 2019 training session in Jenin, and previous destructive wildfires, including the 2016 fires near Haifa and Jerusalem, have also been fought by both teams of firefighters.

Israeli Defence Minister Benny Gantz thanked the Palestinian Authority leader Mahmoud Abbas for the initiative to send aid to the areas affected, and expressed that “solidary and saving lives are a mutual interest for us all”.

Israel had recently sent firefighters and equipment Greece and Turkey, which battled devastating blazes over the past few weeks.