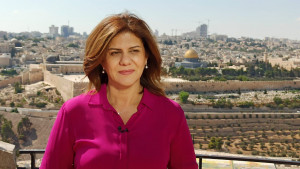 Shireen Abu Akleh, a Palestinian-American journalist working for Al Jazeera, was killed on Wednesday after being shot in the head during clashes between armed Palestinians and Israel Defense Forces (IDF) troops in the northern West Bank town of Jenin

An initial autopsy of Abu Akleh’s body by Palestinian coroners reportedly found that it was “not possible” to tell whether she was killed by Israeli or Palestinian gunfire. The Palestinian Authority (PA) said it had refused Israel’s request to conduct a joint investigation into Abu Akleh’s death and to hand over the bullet that killed the journalist.

Israeli news outlet Channel 2 reported that the bullet was a 5.56×45mm NATO round, used by both IDF troops and armed Palestinians for weapons, including M16 and M4 assault rifles.

Abu Akleh was reporting on a raid carried out by IDF troops to apprehend suspects following a series of recent terrorist attacks against Israelis, with 19 Israelis and foreign nationals killed since 21st March.

A number of the recent Palestinian attackers have been from Jenin, or nearby areas. The IDF has conducted arrest raids in and around the town – which is a stronghold of the armed group Palestinian Islamic Jihad – in recent weeks.

The IDF said that “during the activity, tens of Palestinian gunmen fired at and hurled explosive devices toward the soldiers. The soldiers responded with fire toward the gunmen and hits were identified”.

Al Jazeera and the Palestinian health ministry have claimed that Abu Akleh and a second Palestinian journalist, Ali al-Samoudi, who was wounded, were hit by Israeli fire.

Israel disputes this assessment, with Israeli Prime Minister Naftali Bennett contending that “it appears likely that armed Palestinians – who were firing indiscriminately at the time – were responsible for the unfortunate death of the journalist”.

Israeli Defense Minister Yair Lapid said that Israel had “offered the Palestinians a joint pathological investigation into the sad death of journalist Shireen Abu Aqla”. He underlined: “Journalists must be protected in conflict zones and we all have a responsibility to get to the truth”.

IDF Spokesperson Brig. Gen. Ran Kohav said that the Palestinians have refused to work with Israel on the investigation into Abu Akleh’s death. He added that the IDF would use “all the tools at our disposal in order to arrive at the truth”.

At least 16 Israelis and three foreign nationals have been killed in seven recent stabbing, shooting and axe attacks in Israel and the West Bank. The IDF has conducted arrest raids in the West Bank to capture suspects and prevent the build-up of weapons, yet the raids sparked clashes that have left at least 27 Palestinians dead. Many of those took part in the violent clashes, while others appeared to have been civilians.

Violence has been fomented by repeated inflammatory false allegations from the Palestinian Authority, Fatah and Hamas accusing Israel of planning to destroy the al-Aqsa Mosque and other Muslim holy sites in Jerusalem.

The leader of the Hamas terror group in Gaza, Yahya Sinwar, urged Palestinians and Israeli Arabs to attack Israelis with whatever they had: “Let everyone who has a rifle, ready it. And if you don’t have a rifle, ready your cleaver or an axe, or a knife”. Recent Palestinian attackers may have been inspired by this speech to carry out an axe attack leaving three Israelis dead. Hamas praised the attack as “a heroic operation”.