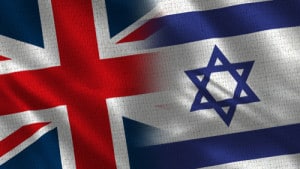 A Number 10 statement said that during this call the two leaders spoke about the progress made during the pandemic; specifically, managing Omicron, the rollout of booster vaccinations and efforts to reopen international travel.

The leaders also discussed the ongoing talks on the Iran nuclear deal that have been taking place in Vienna. Prime Minister Johnson told Prime Minister Bennett that the UK wants to see the negotiations in Vienna lead to full restoration of the JCPoA (Joint Comprehensive Plan of Action aka Iran nuclear deal), but that Iran must engage in good faith.

The importance of continued bilateral coordination in order to achieve common goals was also raised, with the two leaders welcoming plans to negotiate the UK-Israel Free Trade Agreement, and said that they looked forward to a joint innovation summit in the UK later this year.

Speaking at the CFI Annual Business Lunch in November 2021, Prime Minister Boris Johnson had announced “it’s a relationship getting stronger all the time”, when referring to the political, scientific and economic relationship between the UK and Israel.