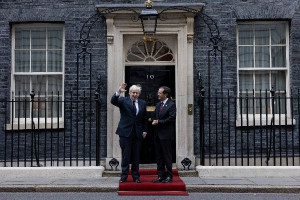 Prime Minister Boris Johnson this week welcomed President of Israel Isaac Herzog to Downing Street, as he made his first visit to the UK as President.

The leaders reaffirmed the strength of the UK-Israel relationship and welcomed bilateral cooperation throughout the pandemic.

President Herzog thanked the UK government for the proscription of Hamas, a decision that Prime Minister Johnson described as “almost immediately vindicated by the appalling incident we saw in Israel” (referring to the murder of Eli Kay in Jerusalem).

President Herzog also paid tribute to the UK-Israel friendship, saying: “As you know my family history goes back in this land for well over a century, and we are very honoured to have this unique relationship with the United Kingdom. We are grateful to you for your great leadership, with the State of Israel, and for your moral clarity when it comes to the State of Israel and the Jewish People and fighting Antisemitism”.

Number 10 said in a statement that the two leaders discussed a range of topics in the meeting including collaboration on green energy technology as well as ways to boost security, trade and technology ties between the two countries.

President Herzog said after the meeting: “I welcomed UK Government decision to proscribe the whole of Hamas as a terror group. Yesterday’s terror attack in Jerusalem by a member of Hamas ‘political wing’ underscores importance of UK’s decision”.

At his meeting with Prince Charles, President Herzog announced an Israeli nursing scholarship at the Hebrew University of Jerusalem is to be named after the Prince of Wales’ grandmother, Princess Alice, who protected a Jewish family during the Nazi occupation of Greece.

President Herzog also stressed his affinity with Britain, speaking of his father, a Belfast-born British Army major who participated in the Normandy landings and liberation of Bergen-Belsen, and his ancestors who served as rabbis across the UK.

Writing for the Jewish Chronicle ahead of his visit, he said “the gentle rhythms of this green and pleasant land are with me every day”. President Herzog also wrote a piece in the Telegraph, on the importance of dialogue, and called for action to stop Iran’s nuclear weapons ambitions.