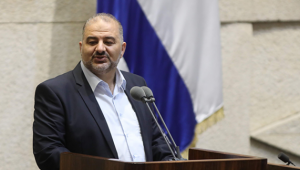 Abbas had originally suspended his party’s membership of the coalition following clashes between Palestinian rioters and Israeli police on the Temple Mount/Haram al Sharif in April.

In a Knesset press conference on Wednesday, the Ra’am leader said that negotiations on new agreements with Foreign Minister and Alternate Prime Minister Yair Lapid had been successful: “We reached understandings for the betterment of Arab society and Israelis in general”. “We decided to come back and give an opportunity for the coalition agreements to be implemented”, he added.

Abbas said that his party had joined the government to help improve the lives of Israeli Arabs on issues such as housing and crime, underlining that he did not want to see another election which could lead to former Prime Minister Benjamin Netanyahu’s return to power.

“We think it is a mistake to go now to elections that would almost certainly return Netanyahu to power, which would destroy our accomplishments for Arab society”, he said. The Ra’am leader emphasised: “We initiated a political partnership to give solutions to Arab residents. Ra’am took this initiative and responsibility to help them and to stabilize Israeli politics after four elections”.

Following the announcement, the Likud party, led by Netanyahu, cancelled its plans to bring the preliminary reading of a bill to dissolve the Knesset to a vote.