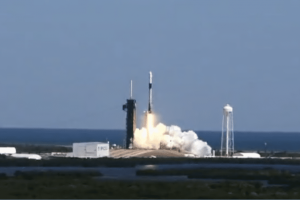 Eytan Stibbe, the second Israeli man into space, arrived aboard the International Space Station this week.

Stibbe is one of four astronauts partaking in the privately funded Rakia mission that launched on 8th  April. He has finally begun to acclimatise to his new surroundings, adjusting to moving around in a low gravity environment, stating in Hebrew: “We’ve gotten used to the lack of gravity by now and have started to feel more comfortable”. Stibbe gave a demonstration of this by letting go of a toy Octopus given to him by his granddaughter and watching it float around the capsule. Although the ISS was over Africa at the time of his communication, he has already managed to spot Israel from the window of the ISS.

Sadly, the first Israeli astronaut, Ilan Ramon, was killed when his vessel attempted re-entry into the Earth’s atmosphere. Ramon’s family were present when Stibbe’s voyage was first announced and were present during the launch in Orlando, Florida. Stibbe plans to pay tribute to the former astronaut by carrying mementos from Ramon’s children. Despite the dangers, he remains in high spirits, stating: “I feel very safe, and trust the tools and the equipment we have”.

The Rakia mission has been praised by several organisations for its historic commercial partnership between Axion Space and Space X, with NASA arguing that the commercialisation of ‘Low Earth Orbit’ allows them to focus on more difficult scientific expeditions into deeper space. Rakia stated that it does not want its mission to be considered a type of space tourism, like those carried out by Virgin Galactic, with Stibbe being tasked with carrying out at least 35 different experiments for private companies and research organisations whilst aboard.