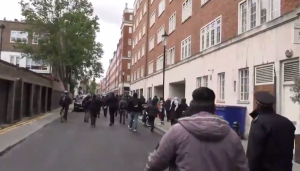 Conservative MP for Middlesbrough South and East Cleveland, Simon Clarke, this week wrote to the Metropolitan Police over an incident which was filmed and widely shared appearing to show at least one of its officers ignoring death threats against Jews.

Footage emerged of a mob walking through the streets of central London on Sunday, yelling: “We’ll find some Jews. We want the Zionists. We want their blood”.

The group had just attended a counter-demonstration, opposing a rally organised by the Zionist Federation in support of Israel. Writing to Dame Cressida Dick, Mr Clarke MP said: “I am deeply concerned by the recent scenes of antisemitic abuse which have been witnessed across London – some of which appear to be committed with near impunity”.

He added that the words in the video are “a repugnant example of hate crime and also seem to me a clear attempt to incite violence. Yet the footage shows no attempt by the officers present to intervene”.

A police spokesperson later said on Twitter: “The Met are aware of this footage and officers from the Met’s Public Order Crime Team are making enquiries. Anyone with information is asked to contact the Met by dialling 101 or by Tweeting @MetCC on Twitter”.

It confirmed that further internal enquiries are being made as to why officers did not intervene.

Responding to a letter from CFI Parliamentary Chairman (Commons) Rt. Hon. Stephen Crabb MP and LFI Chairman Steve McCabe MP this week, Dame Cressida said that the Metropolitan Police are “determined to provide the best support and protection we can to our Jewish communities – and indeed all communities – at this difficult time”.