Sir Eric Pickles joins March of the Living with 12,000 others in Poland 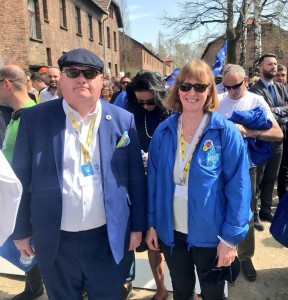 The UK’s Special Envoy on Post Holocaust Issues and former CFI Parliamentary Chairman, Rt. Hon. Sir Eric Pickles, attended March of the Living in Poland this week, where 12,000 participants marched together from Auschwitz to Birkenau in memory of the victims of the Holocaust.

Thousands of participants walked together with Holocaust survivors along the two mile railway track between Auschwitz and Birkenau, where 1.1 million Jews were murdered.

The historic march was held a week before Israel’s 70th Independence Day and was led by Israel’s President Reuven Rivlin, accompanied by the heads of Israel’s security forces.