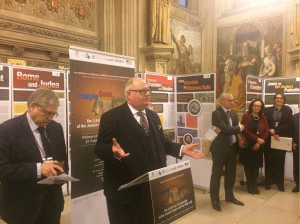 The exhibition, “People, Book, Land; The 3,500 Year Relationship of the Jewish People with the Holy Land” was sponsored by the United Nations Educational, Scientific and Cultural Organization (UNESCO) and shown at its headquarters in 2014. It has also been displayed at the Vatican, Capitol Hill in Washington, Paris, and Chicago.

The 24 sections of the exhibition showcase the Jewish narrative from the biblical prophets and early Jewish history to the Holocaust and establishment of the State of Israel.

Addressing MPs, peers and supporters, Sir Eric Pickles said: “In a turbulent sea, Israel is a bastion of democracy, a bastion of free speech”.

New Deputy Israeli Ambassador, Sharon Bar-li, was welcomed for the first time in the Houses of Parliament at the exhibition, she said: “It is an honour to be speaking in heart of British democracy. One unquestionable truth, the land of Israel remains the epicentre of Jewish life. The same land in which our forebears Abraham Isaac and Jacob walked. Israel was reborn 68 years ago and is now a beacon of democracy, tolerance, pluralism”.

A statement supporting the exhibition launch was read on behalf of the Director General of UNESCO.

Dr Shimon Samuels, Director for International Relations at the Simon Wiesenthal Centre presented Sir Eric Pickles and Lord Carey, previous Archbishop of Canterbury, with special gifts as a token of appreciation for their support for the exhibition.