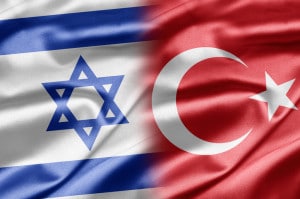 Israeli Foreign Minister Yair Lapid and Turkish Foreign Minister Mevlut Cavusoglu met in Jerusalem this week – the first such visit in 15 years. The visit represents the latest sign of momentum towards the restoration of diplomatic ties between the two countries, with the ministers discussing economic cooperation and a new aviation pact.

The two ministers met on Wednesday morning, following Cavusoglu’s meeting with Palestinian Authority President Mahmoud Abbas the previous day, the first trip of its kind to Israel in 15 years. Among issues discussed was a revamping of the economic partnerships between the two countries and relaunching the Joint Economic Commission. In a public statement Lapid said: “The goal is to form and expand economic and civil cooperation between our countries…to create business-to-business and people-to-people ties, and to leverage our two countries’ comparative advantages regionally and globally”. Adding: “We won’t pretend that our relationship has not seen ups and downs, but we remember that Turkey was the first Muslim nation to recognise Israel, back in 1949. And we have always known how to return to dialogue and cooperation”.

Also discussed was the aviation sector which has become a substantial economic link, with a growing number of tourists flowing between Israel and Turkey. Israeli airlines have been largely unable to operate in the Turkish market since 2007, due to Turkey refusing to accommodate Israel’s special security requirements; whereas Turkish Airlines has grown to be the second-largest airline operating out of Israel. A new aviation agreement would hopefully allow Israeli carriers to once again fly to Turkey and be a big boost to Israel’s aviation sector.

Relations between Israel and Turkey have soured since 2018, after Turkey expelled Israel’s envoy and forced him to be subjected to a security check in front of the press, following deadly clashes on the Gaza border in 2018. Israel reacted be expelling his Turkish counterpart in return. Earlier this year, Israeli President Issac Herzog visited Turkey to begin the process of improving relations. Although, Israel is keen to restore cooperation, it would like to see Turkey do more to prevent Hamas using Turkey as a base to raise funds and plan its terror activity in the West Bank. Israel is concerned about Turkish President Erdogan’s warm relations with Hamas however, Lapid made no direct mentions of Hamas in his public statements, except a broader reference that Israel expects its allies to aid the fight against terror. The two ministers did not address a timetable for the mutual restoration of their envoys, an indication that further work must be done to completely restore the bilateral relationship.

During the trip, Cavusoglu visited the Yad Vashem Holocaust Memorial and is expected to also visit the Al Aqsa Mosque and the Temple Mount/Al-Haram Al-Sharif.