UK and Israel celebrate centenary of the Balfour Declaration

Joining the two leaders in marking the anniversary today, were International Development Secretary Rt. Hon. Priti Patel MP, who spoke at a Jewish News/BICOM conference about the centenary, and 100 Conservative parliamentarians who co-signed a CFI letter celebrating the Balfour Declaration in The Telegraph.

The centenary today completes a year of celebrations, culminating tonight in a dinner co-hosted by the current Lord Balfour and Lord Rothschild, to be attended by Prime Minister Theresa May and Israeli Prime Minister Benjamin Netanyahu, who is in London at Mrs May’s invitation.

Speaking before their meeting in Number 10, Prime Minister May told the Israeli leader that the UK “is proud of the role it played in the establishment of the State of Israel”, and that the Government “remains committed to the two-state solution”.

Israel’s Prime Minister Netanyahu hailed the UK-Israel relationship, stating: “A hundred years ago, the Balfour Declaration helped pave the way for the reestablishment of an independent state for the Jewish people in our ancestral homeland. A hundred years later, our two countries, our two democracies – Israel and Britain – are strong allies and partners”.

To mark the milestone in the UK and Israel’s shared history, over 100 Conservative MPs and Lords have co-signed a letter published in The Daily Telegraph. The letter – coordinated by Conservative Friends of Israel – celebrates the centenary and the UK-Israel relationship. 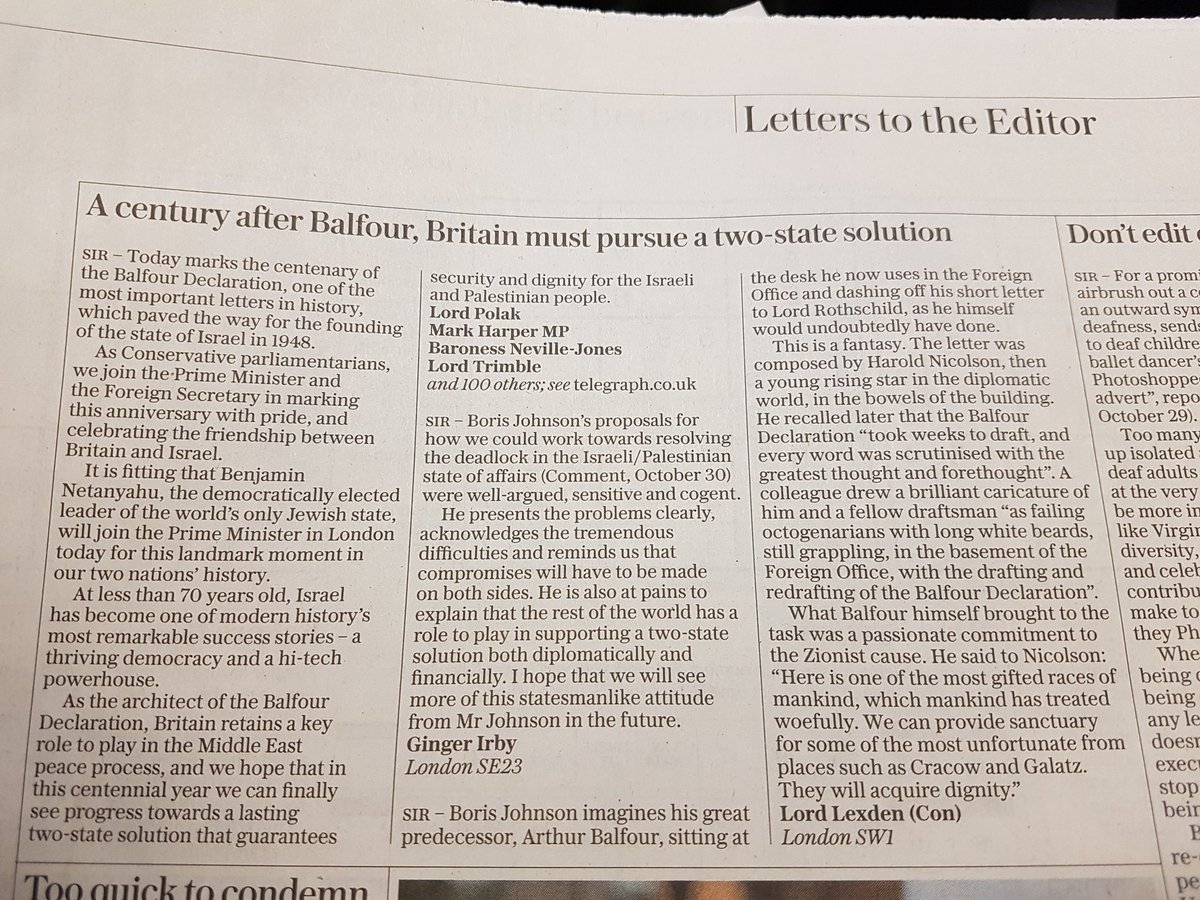 The Conservative parliamentarians joined the Prime Minister and Foreign Secretary in “marking this anniversary with pride, and celebrating the friendship between the UK and Israel”. In the letter they hail the successes of the Jewish State, which has become “one of modern history’s most remarkable success stories – a thriving democracy and a high-tech powerhouse”.

“As the architects of the Balfour Declaration”, they write, “the UK retains a key role to play in the Middle East Peace Process”. The parliamentarians share their hope that this centenary year will be the year “we can finally see progress towards a lasting two-state solution that guarantees security and dignity for the Israeli and Palestinian people”.

International Development Secretary, Rt. Hon. Priti Patel MP, celebrated the centenary at the Jewish News/BICOM conference today, and underlined that “Britain’s commitment to Israel’s security is unwavering”. She said: “Israel stands out as a free society and a beacon… Britain will stand by these values and by Israel”. CFI Vice-Chairman, Rt. Hon. Theresa Villiers MP introduced the Secretary of State, where she said she was “happy to sign” the celebratory letter alongside 100 parliamentarians.

The Balfour Declaration was a letter from Conservative Foreign Secretary Arthur James Balfour to Lord Rothschild (as a representative of the British Jewish Community and for passing on to the Zionist Federation) on 2nd November 1917 promising support for the creation of a national homeland for the Jewish people in the land of Israel.

On Monday, Foreign Secretary Boris Johnson hailed the “miracle of Israel” and stated that the creation of the country is “one of the greatest political triumphs of the 20th century”, at a cross-party Board of Deputies (BOD) parliamentary reception in association with CFI to mark the Balfour Declaration centenary.

During his speech, Foreign Secretary Boris Johnson underlined: “The Balfour Declaration, whatever its defects, whatever its unfulfilled nature, paved the way for one of the greatest political triumphs of the 20th century, the creation of the State of Israel, which, after all, is a democracy, a liberal society, a beacon of hope and which shares the values in which I passionately believe. This is an amazing achievement by humanity”.

The Foreign Secretary said: “Speaking as an ex-kibbutznik, who spent most of his time doing the washing up, I recognise the magic, the genius, and miracle of Israel. And that is why we should mark Balfour with pride and with respect”.

In an op-ed in the Telegraph newspaper on Sunday, Foreign Secretary Johnson said that the Balfour Declaration was “indispensable to the creation of a great nation”. Click here to read the article.

Foreign Secretary Boris Johnson gave a parliamentary statement in the House of Commons on Monday, where he asserted that “we should celebrate the existence of Israel”. In his statement, the Foreign Secretary said that there is an “incontestable moral purpose of Israel to provide a persecuted people with a safe and secure homeland”. He emphasised: “We should not brush aside how the pernicious extent of antisemitism in Europe in the late 19th and early 20th centuries—decades before the Holocaust—created the necessity for the Balfour Declaration”.

The Foreign Secretary’s statement was followed by numerous Conservative MPs voicing their support of Israel and celebrating the declaration’s centenary. Read the full transcript of the statement and debate on Hansard.

Last Wednesday, Prime Minister Theresa May led Conservative MPs in celebrating the Balfour Declaration’s centenary, stating at PMQs that the UK would “certainly” be marking the 100 year anniversary “with pride”, in response to a question from Conservative MP Robert Jenrick. Watch the exchange on CFI’s Youtube.

Over 20 Conservative MPs celebrated the landmark moment in the UK-Israel shared history in a Westminster Hall debate on the Balfour Declaration, which was led by CFI Officer and Conservative MP for Hendon, Dr Matthew Offord.

In the debate, Middle East Minister, Rt. Hon. Alistair Burt, reasserted that the UK will celebrate the centenary “with pride” and that the establishment of Israel was “the right and moral thing” for the UK to do.